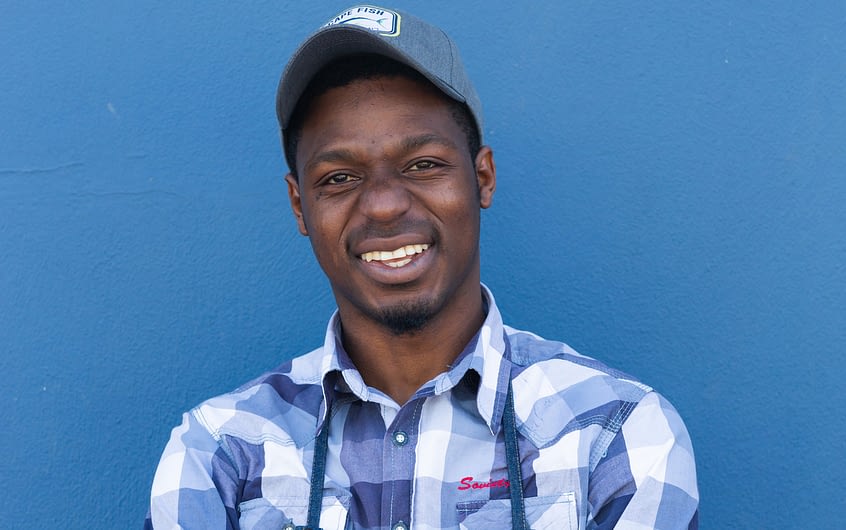 Originally from Kadoma in Zimbabwe, Leeroy Mabuto arrived on South African soil in 2013, just after he finished high school. He was unemployed and looking for work when he saw a post on Gumtree about a job opportunity at Cape Fish. He applied, and got a call from Kevin (for those of you living under a rock, Kev’s a part-owner of Cape Fish) and was asked to come in for an interview.

Leeroy vividly remembers anxiously coming in for the interview at 1pm. After 2-3 days of waiting to hear back, he thought he’d missed his chance. However, a week after the interview, he got a call from Kev saying he could start working from Monday! He has never looked back.

Leeroy started at the Cape Fish store, working under Romeo, the previous Retail Manager. Within three months, Leeroy took over Romeo’s position, and Romeo moved to another position in the factory. The first three months of opening up the retail side was difficult and slow, but in October things picked up. In November, he got an assistant, and has remained in charge of Cape Fish’s retail sector ever since.

He started off as a waiter at the restaurant Shin Thai Asian Kitchen, then at The Galley in Fish Hoek. He then worked as a maintenance assistant at Colona Castle Hotel in Lakeside, dealing with their website, bookings, check-ins, and payments. He felt too busy and stressed, and wanted a change from spending most of his time on his feet. Since starting at Cape Fish, he’s learnt how to fillet fish and the company are supporting him to complete a HACCP course (food handling health exam).

“I’ve learnt that I’m good at handling the responsibility of being in charge; wherever I’ve worked, I’ve ended up in a management position. I’ve only just turned 25, so I’m proud of myself, and the way I have progressed in each business” says Leeroy.

Leeroy is thoroughly enjoying being part of a team, and a local business. “I love cutting and packing the fish correctly. This, along with seeing our loyal customers who know me by name, is the most rewarding part of my job. It’s great to get to a point where I can build this personal relationship with customers. I love Cape Fish’s Dorado fish the best!” Although he is happy at Cape Fish, his ambitions stretch far into the future and revolve around food, “One day I’d like to open up my own shop or restaurant and cook like I’ve done since I was a child,” he concludes.