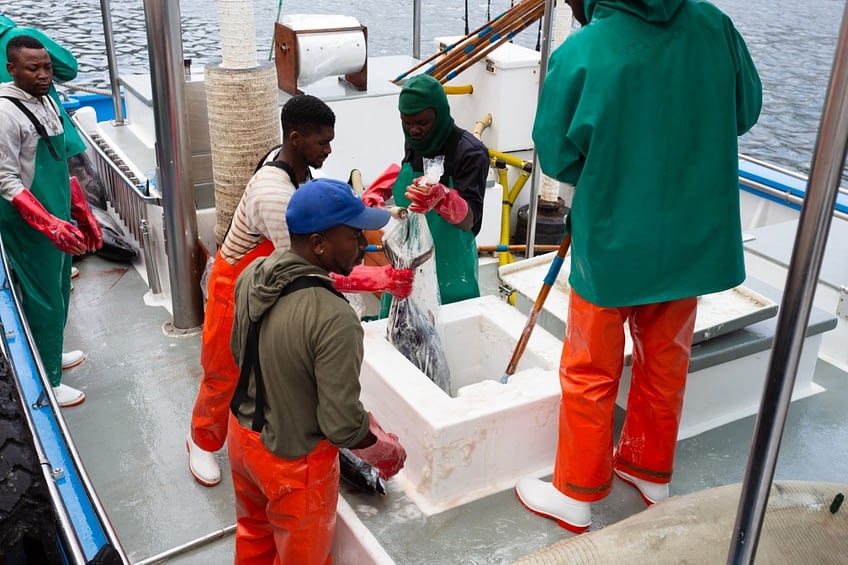 At Cape Fish we always aim to go above and beyond when it comes to the seafood we offer to both our retail and wholesale customers. Doing so has sometimes led us down the path of less fruitful ventures, frustrating dead ends and the occasional blunder, but it has also spurred us towards some avenues we’re very proud of. In many cases, it lets us set the bar higher, and we’re confident that those whom we deal with appreciate the extra effort.

Ikejime (活け締め) or Ikijime (活き締め) is a more humane method of killing and preparing fish developed to prolong the length of time for which the flesh remains fresh. This means that you can take advantage of a greater range of textures and flavours as the fish ages. Most importantly, ikejime ends the fish’s life in the least stressful way possible, as soon as it comes out of the water. The technique originated in Japan but is now in use worldwide and is becoming a focus point for us when it comes to certain linefish.

Currently, it’s used for all yellowfin and bigeye tuna processing onboard vessels, but hasn’t yet made itself down to linefish fishery due to time restraints. It changes the haul from a process of being able to catch a lot of fish quickly to a situation where each fish is handled and processed with focus and attention to detail, resulting in the highest quality product. It is therefore very labour intensive, but we believe that these things really matter.

Seriola Lalandi, otherwise known as Cape Yellowtail, is a fish that’s made a bit of a name for itself! Sadly, traditional line fishing boats don’t have a strong reputation. From situations where there’s no ice and the fish sit in the sun, to flapping around and bruising themselves onboard vessels, it’s not a fishery style we’re comfortable with. The fish is suffering, and so is the quality of the product you receive. These factors can play a role in creating a soft-textured and light-coloured flesh through the fish, or worse yet, spike histamines in the fish that cause patrons to have an unpleasant reaction.

We’ve been working alongside one of Cape Town’s spin fisherman, Bruce Bakker, to try and develop an established niche market for some exceptionally looked after ikejime yellowtail. Bruce has spent many years grading tuna for two major tuna and yellowtail export companies in South Africa, and has always been known to jump on various vessels with his rubber soled gumboots.

Currently he’s running a small linefish licensed vessel that targets yellowtail with the ‘spinning’ method. This involves casting small but heavy ‘spinners’ at shoals of hungry yellowtail in the hope that they’re enticed to slurp down an anchovy-shaped spoon or bright Teflon-coloured plug. This method allows him to deal with the fish one by one, employing the ikejime method whereby a ‘car like aerial’ is inserted up the fish’s tail into its spine and severs all nerves, thus stopping muscle contractions and adrenaline rushing into the meat of the fish.

Once this is done, the fish is bled and then chilled in a slurry of icy water bringing the core temperature down, firming up the flesh and ensuring that the integrity of the fish’s fillets are kept at the highest possible quality.

We are proud to be building relationships with people such as Bruce who share our values, and passion for the best possible seafood. It’s our pleasure to bring you fish we believe in.